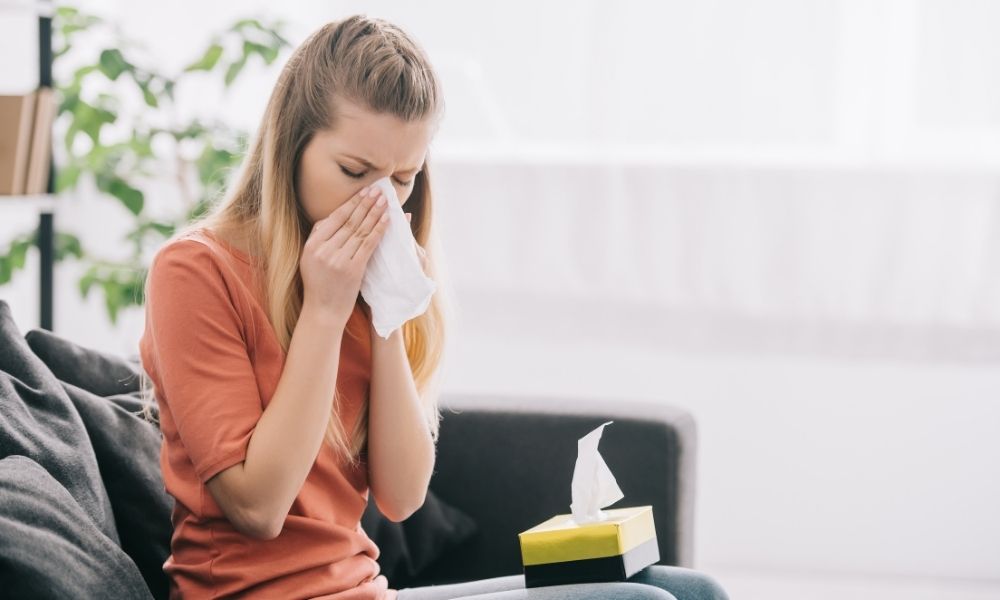 Where would we be without our immune system? A robust and responsive immune system works hard, often without us even knowing it, to keep our body safe against harmful pathogens. But the body’s immune system can overreact to a perceived threat, and such an immune response can be unpleasant—if not dangerous. This sort of internal hypervigilance is the basic idea behind an allergic reaction.

Your body can have this reaction to numerous substances that, in and of themselves, are innocuous: while breathing in dust and pollen is not good for your health, it’s not on the same level as viruses or bacteria, the two sworn enemies of the human immune system. Another such substance is mold spores, the reproductive units of fungi, which are ubiquitous in the environment and your home. Mold allergies are common and uncomfortable, but fortunately, they are treatable. Here are some of the signs and symptoms of a mold allergy—and what you can do to address them.

Persistent sneezing is a telltale sign of a mold allergy. Histamine is one of the most reliable weapons our immune system wields. This compound, which the immune system releases under threat, elicits responses that purge an immune system’s trigger from the body. These can include itchiness, tearing, and, most commonly, sneezing and coughing. The overreaction of a histamine response is why we so often take antihistamines as an over-the-counter response to allergic reactions. By suppressing this overreaction, we can avoid some of these uncomfortable allergy symptoms.

Another one of the most immediate symptoms of a mold allergy is a dry and scratchy throat, prompting a nagging cough. In some cases, mold can cause heavier coughs as well. Mucus and histamine production can lead to persistent coughing as your body tries to clear the throat of mucus buildup. Treat your cough using hot tea with lemon and honey, cough drops, or ginger root. Most of all, try to identify the source of the mold allergy and remove it from your surroundings, if possible.

A stuffy nose often accompanies an allergic reaction to mold. Again, histamine is the culprit for much of this discomfort. Histamine is a vasodilator—a chemical that expands the blood vessels. (Contrast with a vasoconstrictor, such as epinephrine or adrenaline.) By opening the blood vessels and sending more blood to the head, inflammation occurs around the paranasal sinuses, blocking airflow through the nose. An antihistamine can relieve some of this immune response, but again, your goal should be to reduce the presence of mold if you can.

Your body’s overproduction of mucus can reveal itself not only through a persistent cough but also through your body’s attempts to dispose of it. The body continually produces mucus, a viscous fluid that serves to lubricate as well as clean. It’s the second of these two functions that is pertinent to the allergic response. Mucus captures foreign invaders, like viruses and bacteria, and flushes them out, often harmlessly and unnoticeably. But when the body produces more mucus in the respiratory system than it can quietly dispose of, you notice the output in the form of a runny nose or postnasal drip. Whether excess mucus drains through the nostrils or down the throat, the discomfort it creates can indicate that the body is responding to the presence of mold.

The body’s histamine response can even manifest itself in your eyes. Not only are your eyes the proverbial window to the soul, but they’re also useful windows into your health at large, and irritated eyes can be indicative of illness. Just like the nose, mouth, and lungs, the eyes feature mucous membranes that look to catch and release irritants such as mold spores. As the eyes attempt to flush these irritants, you’ll feel the discomfort of that effort. Vasoconstricting eyedrops may seem like an apt response, but the eyes can become dependent on them and dilate even more in response. If your eyes are reacting to an allergy along with your respiratory system, it’s best not to treat the eyes directly.

Does This Sound Familiar?

While allergic reactions to substances like peanuts and bee stings are unmistakable, a mold allergy certainly sounds a lot like just “being sick.” Mold allergies are not just uncomfortable but deceptive as well. Diagnosing a mold allergy can be challenging because it’s so easy to mistake it for a cold, the flu, or another upper respiratory infection. What sets a mold allergy apart?

Sometimes, a mold allergy can go beyond what feels like the common cold. Mold spores can reach the lungs and trigger asthma attacks. Most pernicious about a mold allergy that progresses to this stage is that one need not be in the presence of a great deal of mold to have an attack. Another instance of the immune system being too vigilant for its own good is that it remembers its adversaries, so it may take only a tiny amount of mold for the immune system to go into overdrive. Many allergens can elicit asthma attacks, but mold, along with tobacco smoke and air pollution, is among the most common owing to its ubiquity in the environment.

Mold Around the House

While antihistamines can address many of the symptoms of a mold allergy, they are often not a sufficient standalone response to mold. Antihistamines can have sedating effects on users and adversely interact with other prescription and over-the-counter medications, so it is best not to rely on them entirely. Instead, after identifying signs and symptoms of a mold allergy, work to reduce the presence of mold in your home. This process often involves optimizing air filtration systems, cleaning bathrooms regularly, and making basement living spaces as hypoallergenic as possible by limiting porous surfaces, such as carpeting, where moisture and attendant mold can build up. While it is impossible to eliminate mold exposure, especially outdoors, you can significantly mitigate mold exposure within the home.

If you’ve addressed mold allergy symptoms and their root causes but still struggle with your allergies, perhaps medical intervention is necessary. Don’t hesitate to consult an allergist if these symptoms encroach significantly upon your quality of life. For East Texans who struggle with the lush and humid environment, Allergy & ENT Associates is a leading allergy clinic in the Houston area that can seek to address some of the most persistent symptoms you experience. We wish you the best in finding an allergist who is right for you.

This entry was posted in Allergy on December 3, 2020 by AENT Team.